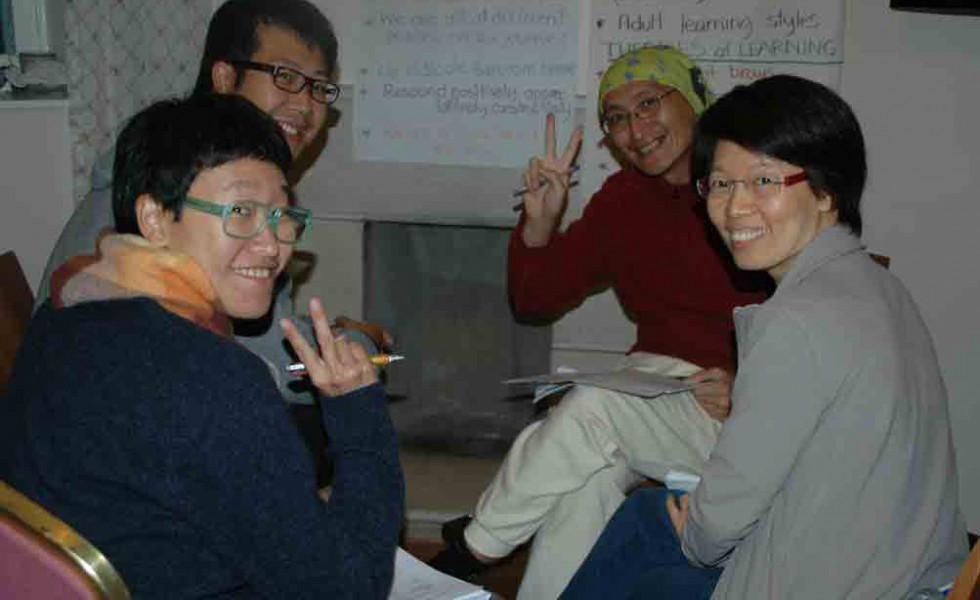 Guide on the Side, or the Sage on the Stage?  Which teaching method has proven results?

In this research article, university professors from prestigious universities in USA (Maryland, Harvard and Arizona) looked at the effectiveness of students’ understanding of physics concepts when the information was conveyed by  lectures, or, with more student involvement.

As the students were all pretty smart it is tempting to think they would easily grasp conceptual material. However the results were very different. It was demonstrated that 90% benefited from being actively involved in developing concepts, rather than being the recipients of a lecture.  In their work, the researchers found that students’ learning was most effective when they worked in small groups rather than in lectures.

Physicists Seek To Lose The Lecture As Teaching Tool

American Radioworks is the documentary series from American Public Media. You can find more of their reporting on this issue at “Don’t Lecture Me.”

“The lecture is one of the oldest forms of education there is.

“Before printing someone would read the books to everybody who would copy them down,” says Joe Redish, a physics professor at the University of Maryland.

But lecturing has never been an effective teaching technique and now that information is everywhere, some say it’s a waste of time. Indeed, physicists have the data to prove it.

When Eric Mazur began teaching physics at Harvard, he started out teaching the same way he had been taught.

“I sort of projected my own experience, my own vision of learning and teaching — which is what my instructors had done to me. So I lectured,” he says.

He loved to lecture. Mazur’s students apparently loved it, too. They gave him great evaluations and his classes were full.

“For a long while, I thought I was doing a really, really good job,” he says.

But then in 1990, he came across articles written by David Hestenes, a physicist at Arizona State. Hestenes got the idea for the series when a colleague came to him with a problem. The students in his introductory physics courses were not doing well: Semester after semester, the class average never got above about 40 percent.

“I noted that the reason for that was that his examination questions were mostly qualitative, requiring understanding of the concepts rather than just calculational, using formulas, which is what most of the instructors did,” Hestenes says.

Hestenes had a suspicion students were just memorizing the formulas and never really getting the concepts. So he and a colleague developed a test to look at students’ conceptual understanding of physics. It’s a test Maryland’s Redish has given his students many times.

Here’s a question from the test: “Two balls are the same size but one weighs twice as much as the other. The balls are dropped from the top of a two-story building at the same instant of time. The time it takes the ball to reach the ground will be…”

To get to the answer, Redish went to the second floor of the physics building. A group of his students was on the sidewalk below. When he reached the top, he dropped two balls from the roof.

The two balls reached the ground at the same time. Sir Isaac Newton was the first person who figured out why. He came up with a law of motion to explain how two balls of different weights, dropped from the same height, hit the ground simultaneously.

While most physics students can recite Newton’s second law of motion, Harvard’s Mazur says, the conceptual test developed by Hestenes showed that after an entire semester they understood only about 14 percent more about the fundamental concepts of physics. When Mazur read the results, he shook his head in disbelief. The test covered such basic material.

“I gave it to my students only to discover that they didn’t do much better,” he says.

The test has now been given to tens of thousands of students around the world and the results are virtually the same everywhere. The traditional lecture-based physics course produces little or no change in most students’ fundamental understanding of how the physical world works.

“The classes only seem to be really working for about 10 percent of the students,” Arizona State’s Hestenes says. “And I maintain, I think all the evidence indicates, that these 10 percent are the students that would learn it even without the instructor. They essentially learn it on their own.”

He says that listening to someone talk is not an effective way to learn any subject.

“Students have to be active in developing their knowledge,” he says. “They can’t passively assimilate it.”

This is something many people have known intuitively for a long time — the physicists just came up with the hard data. Their work, along with research by cognitive scientists, provides a compelling case against lecturing. But with budgets shrinking and enrollments booming, large classes aren’t going away. You don’t have to lecture in a lecture hall though.

Mazur’s physics class is now different. Rather than lecturing, he makes his students do most of the talking.

At a recent class, the students — nearly 100 of them — are in small groups discussing a question. Three possible answers to the question are projected on a screen. Before the students start talking with one another, they use a mobile device to vote for their answer. Only 29 percent got it right. After talking for a few minutes, Mazur tells them to answer the question again.

This time, 62 percent of the students get the question right. Next, Mazur leads a discussion about the reasoning behind the answer. The process then begins again with a new question. This is a method Mazur calls “peer Instruction.” He now teaches all of his classes this way.

“What we found over now close to 20 years of using this approach is that the learning gains at the end of the semester nearly triple,” he says.

One value of this approach is that it can be done with hundreds of students. You don’t need small classes to get students active and engaged. Mazur says the key is to get them to do the assigned reading — what he calls the “information-gathering” part of education — before they come to class.

“In class, we work on trying to make sense of the information,” Mazur says. “Because if you stop to think about it, that second part is actually the hardest part. And the information transfer, especially now that we live in an information age, is the easiest part.”

Mazur’s approach is one of many developed in response to evidence that traditional lectures don’t work. Among the advocates of these approaches there’s an increasing sense of urgency about how to help more students do better.

“We need to educate a population to compete in this global marketplace,” says Brian Lukoff, an education researcher at Harvard. “We can’t do that by just sort of picking out 10 percent and saying, ‘Oh you guys are going to be the successful ones,’ and you know we need a much larger swath of that population to be able to think critically and problem-solve.”

But ask anyone involved with efforts to lose the lecture and they’ll tell you they encounter resistance. Sometimes the stiffest opposition comes from the students.

“Revamping my entire education, you know, philosophy for this one class was a bit daunting,” says Ryan Duncan, a sophomore in Mazur’s class.

But he adapted and says he learned more in Mazur’s class than he did in his other physics course at Harvard.

“With modern technology, if all there is is lectures, we don’t need faculty to do it,” Redish says. “Get ’em to do it once, put it on the Web, and fire the faculty.”

Some faculty are threatened by this, but Mazur says they don’t have to be. Instead, they need to realize that their role has changed.

“It used to be just be the ‘sage on the stage,’ the source of knowledge and information,” he says. “We now know that it’s not good enough to have a source of information.”

Mazur sees himself now as the “guide on the side” – a kind of coach, working to help students understand all the knowledge and information that they have at their fingertips. Mazur says this new role is a more important one.”